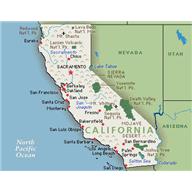 
In response to mixed opinions on the subject of what kind of rhubarb can be grown in Southern California - yes, it grew well until about 1990.

This rhubarb resulted from Luther Burbank's selections from New Zealand starting in about 1893. He created 'Crimson Winter' and later, 'Burbank Giant' and 'New Giant Crimson Winter'.

These great cultivars were grown until about the 1980's by the Cleugh family. Another man bought the brand name and roots but was bought out in 1992 and the fields became industrial properties with virtually all the roots being destroyed. Such a shame!

If ANY can be found growing in the South, you will be fortunate.

Thank you very much for this interesting piece of history!

In the 1970's I was researching and trying to obtain a few crowns from the Southern California area to include in my USDA/Michigan State University research plots that over time, totalled over 100 cultivars.

I tried to obtain some Cleugh or Burbank crowns but was unsuccessful as I mentioned in my original posting.

Those of you that have rhubarb are very fortunate. Dale


I am growing Victoria rhubarb in San Diego right now and it seems to be doing wonderful. You shouldn't use until the second season so we'll see next year how it goes but so far it is beautiful. Anonymous


Regarding Southern California, rhubarb can be grown in the Long Beach area. I know of two plants which have lasted decades. Brad Downing


First-hand witness that Rhubarb will definitely grow in San Diego County (mostly zone 9). I just got a ton from a friend's garden and loved it so much I was looking to see if I could figure out what variety I should get to plant it in my own yard! He had three big clumps of it and was dying to give it away. The stems were mostly bright green, rather than red, with red showing only at the very bottom. Iesika

A Rhubarb Lover in Southern California - Rhubarb cannot be grown in Southern California. It needs frost in the winter months. I now get my rhubarb from Ralph's Grocery. It is cut up in cubes and comes from Canada. Since rhubarb is generally cooked, I have many bags in my freezer and it is very reasonably priced. Now I have rhubarb on my oatmeal every day. I make a nice stewed rhubarb with ginger. The best breakfast to eat. Anonymous