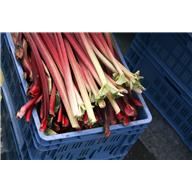 Is hot-house-rhubarb-preferred by you or do you prefer field grown rhubarb?

Never thought much about this until I read up on the differences and apparently to some folks it matters when cooking with it.

If it's field grown in the vegetable/fruit world for all other produce, then this is preferred because of texture and flavor. Real sunlight is better. With rhubarb though, it appears to work in the opposite way.

Field grown rhubarb has that dull brownish color after it's cooked, but hot-house rhubarb still stays pink after cooked and it isn't as stringy.

Have you noticed the leaves from hot house rhubarb are smaller? All energy is focused on the stalks because of less light available.

Keeping the pink color is what most cooks want to do just because it's more attractive on the dinner table.

Victoria hothouse rhubarb has a really nice pink color and the flavor isn't as sharp as one called "refill." Never heard of it, but it's got a much more tart taste apparently than the Victoria brand rhubarb. The "refill" type can be grown outside or indoors.

Hot house rhubarb is much easier to produce than it used to be and we can thank technology for that.

The farmers used to have to tend fires all night to keep the stalks and the soil in the dark rooms good and warm. Furnaces have alleviated the need to be up all night. Imagine the poor farmers having to stoke fires all night long after a day in the fields tending to everything else they had to do in older times.

As for hot-house-rhubarb-preferred at my house or to me, I don't really care. Any rhubarb dishes, field grown or not, have all tasted pretty darn good so far, didn't really consider the difference between the rhubarb brands and that's the main thing in our home.