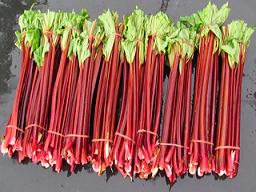 Rhubarb Rheum x hybridum came to Australia from England with the first free settlers, and was well established by 1840.


Many English varieties were imported into Australia; but as was the norm then, all were winter deciduous and the petioles were almost all green, perhaps tinged with a little pink.

Up to 1890 all culinary rhubarb world wide was winter deciduous, when an Australian market gardener (Mr Topp of Bendigo) bred an evergreen variety and called it "Topp's Winter." Within a
few short years it was established in New Zealand, from where it was distributed worldwide.
(This is well documented elsewhere)

Breeding progressed very slowly, with the better clones being jealously guarded by the local farmers, as this plant was justifiably called "The mortgage breaker."

Reddish green, it grew well and could be picked all year round. Came WW11 and rhubarb was in huge demand. As Napoleon Bonaparte said "Cest la soupe qui fait le soldat", or "an army marches
on its stomach." And our generals added "and rhubarb keeps 'em regular." The demand was enormous. No time for breeding just growning.

The war ended, and rhubarb sales collapsed. Rhubarb stagnated. Once productive rhubarb farms were taken over for housing for the returning soldiers. Rare clones were lost forever.

Somewhere in the 1940s or 1950s a clone appeared at Mt Tamborine Queensland, which was an enormous breakthrough in rhubarb breeding. Stunning red petioles from top to bottom grew all year round.

Easy to grow, tasted great, what a rhubarb! But it was a closed shop, they kept it to themselves. It slowly spread from farm to farm in Queensland with each farmer keeping slightly different clones, but it never spread interstate.

We in Victoria developed some splendid vigorous red petioled clones which grew all year round along with winter types which stood up to our harshest coldest windiest conditions (strong winds, frosts, and cold including light snow).

Rhubarb sales slowly increased, with supermarkets giving increased shelf space to this produce, and organic farmers were gaining in popularity.

The year 2000 and CLIMATE CHANGE, with intense drought in Victoria and New South Wales, the southern states, and Mt Tambourine in Queensland, with its magnificent rhubarb clones,
changed from a temperate climate to a hot, humid, sweaty, tropical climate, with endless summer rain and millions of sap sucking disease
spreading insects. Huge rhubarb farms just succumbed to this, and the farmers gave up and switched crops, and their stunning rhubarb was lost, well almost.

For in 2010, I mounted an expedition to Mt Tamborine.

In neglected corners of old farms, back-yards, at organic hobby farms, a few different clones of this magnificent plant were discovered. They now grow happily and safely at my farm.

These will be used for breeding, but at the moment, it's difficult to see how I can improve on some of these magnificent clones.

But time will tell.

Postscript - My father, known as "Rex the Rhubarb King" (a large scale rhubarb farmer from about 1935 to 1980) when asked "is rhubarb a fruit or a vegetable?" he always replied "Neither, rhubarb is rhubarb."

"We are innovative growers specialising in French oriented culinary plants that you can grow in your backyard or on your patio such as rhubarb and truffles."