This wine-barrel-rhubarb method of growing and eventual division of rhubarb plants is amazing, and the little girl in the video shown below is entertaining as well!  She's certainly having a good time helping out her Dad.

With a little time, effort and patience, you can have an above-ground harvest to pick from.

I've done this myself though not in a large barrel.  I did it in different sized containers to start with, and large planters. As my rhubarb grew in size, I did eventually move them to a bed.

Depending upon the size of your container, or barrel, the plants can stay in them as long as they have room to flourish.  They do need space for sure, otherwise the stalks won't be as big and sturdy as they could be.

What I liked about working with them in the containers, was that it gave me some time to clean up the rhubarb bed and get some other things done in early Spring as well.  At the same time, they were all in one little spot and I could keep a close eye on them.

What I liked best?  I could move them around for awhile to better sun exposure.  They were up off the ground and a little more protected from bugs in the early stages, not to mention the "people" traffic and dogs that run around here.

The video shown below is courtesy of JT Bear at his youtube video channel  as he and the family work away at transplanting their rhubarb.

The plants have been in this wine-barrel-rhubarb garden for three years.  It's time to divide and re-plant again.

You will see how the huge crown is carefully dug out of the dirt.  Rhubarb tops are rather delicate, so they are being careful.

The roots go fairly deep.  As the dirt is gently scraped away, they become visible.  Eventually they are given a good clean cut through and then lifted out.  The dirt is then hosed off away from the plant so that the root system becomes clearly visible.

Rhubarb is fairly sturdy but with the gentle pulling, the clump is then separated into single plants.  The chunks of crown are cleaned up and woody hanging pieces removed.

In this nice large wine barrel, the single rhubarb plants are then spaced nicely and replanted back in.

Noticed the pop bottle buried down into the middle in order to allow water to seep out a controlled rate?  Great idea.

I do happen to have a large wine barrel that currently holds geraniums and has seen better days, but it's still quite useful yet.  I think I'll have to put this idea to use.  A wine-barrel-rhubarb garden is certainly on the list for next spring.

Return from Wine-Barrel-Rhubarb to Rhubarb Garden 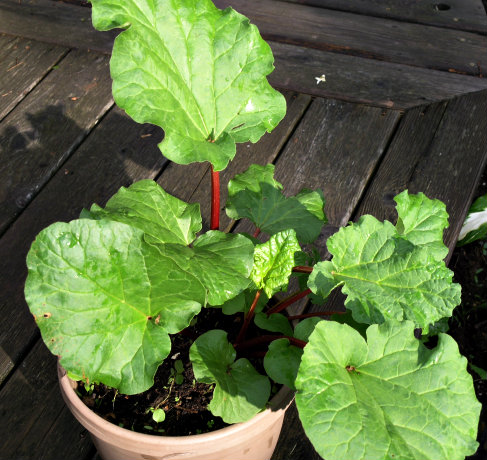